skip to main | skip to sidebar

Adventures in my Kitchen

This is a little late night snack I made for our "date night" at the Dave Matthews Band concert a couple weeks ago (first night out together since the birth of our daughter.....5 months ago!). I ran out of time and did not get a picture of the finished sandwich, but it was incredibly yummy. I still think about it! I roasted eggplant and red peppers at 450 for 25 minutes with olive oil, salt & pepper. Carmelized the onions in a saute pan with a half teaspoon of sugar (to hasten things up) for about 20 minutes. I added goat cheese and fresh basil to this awesome roasted veggie sandwich on whole wheat! 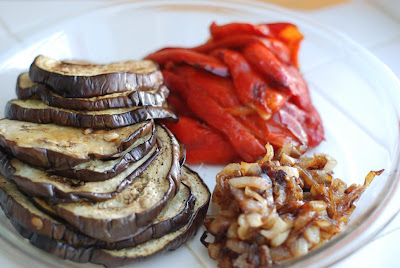 Tried this new recipe called an Upside Down Pizza. Basically layered meat sauce, broccoli, mozzarella and pizza dough on top. It was quite tasty but probably more work than it was worth and harder to eat than the real right-side-up edition. Also, the kids saw the green layer and decided to snub their noses. Erg! 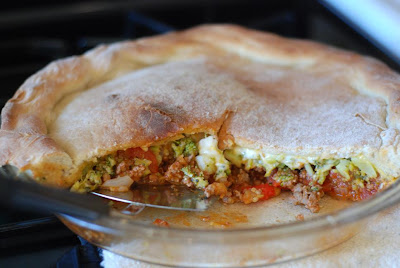 Here is shiny fresh tomato sauce straight from the garden! I had about 6 tomatoes sitting on the counter and decided this was the day I would finally try a fresh tomato sauce. Blanched and peeled the tomatoes first. Sauteed onion, garlic & red pepper flakes until soft, added chopped tomatoes, basil and salt. Simmered for half hour over low heat. Sweet and tangy goodness! The picture is very early on in the process...it turned into a nice red-orange chunky sauce. Added fresh basil, extra salt and olive oil to finish. 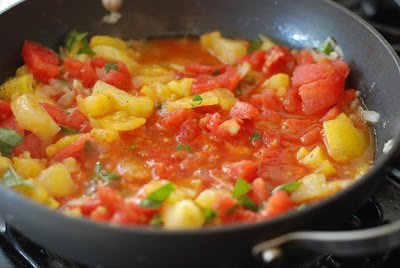 And finally, my second time making a green chile enchilada entirely from scratch. I made the green sauce the day before, roasting green hatch chiles then peeling, seeding and chopping them for the sauce. Inside the corn tortillas are shredded poached chicken and jack cheese. I LOVE the clean fresh taste of the sauce and think this simple recipe from a recent local paper is a keeper! 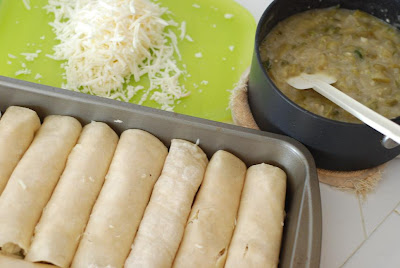 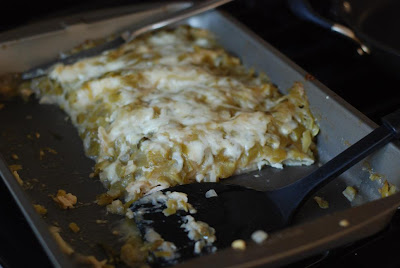 See, I told you I was still cooking. I also made Martha Stewart's Peanut Butter and Jelly Bars that were dense, balanced and incredibly addicting! Bon Apetit...until next time. -Deanna

Deanna S.
San Francisco East Bay, United States
I'm a proud mom of two rambunctious boys, ages 4 and 6, and a baby girl, who keep me very busy. When I do get a free moment, I enjoy cooking and taking pictures. I also adore spending time with my family and friends, playing pool, golf, foreign movies, Scrabble, working out and stomping in puddles.